Do you recall the movie "Enough" starring Jennifer Lopez as the working-class waitress "Slim" whose life was transformed when she married a wealthy contractor played by Billy Campbell?  In this movie, it was clear when ENOUGH was enough when Slim's mindset changed and the actions that followed.

When is ENOUGH, enough for you? It is not the same for everyone. Even when you think you have had ENOUGH, somehow you continue doing the same thing. WHY? Because you only have had "SOME" of ENOUGH.  When you have had ENOUGH of ENOUGH you will take action and never look back. Well, my ENOUGH of ENOUGH came when the doctor told me i would be taking a pill every day for the rest of my life because i was PRE-diabetic, overweight and a HIGH RISK due to family history and being African American.  Well,  i SAID ENOUGH IS ENOUGH!  That was the day my journey officially began.  I drew a CIRCLE around it as i was not claiming this to be so for my life! The LORD GOD is my PORTION!

My prayer life changed because i now had to DECLARE what GOD says about #myHealthNarrative and that did not include "taking a pill EVERYDAY for the rest of my life.  But that was not all i had to do, i now had to LIVE IT 365...one day at a time.  The PRE-diagnosis was given to me in 2016 but as of the May 2017 that report is no longer the final answer on my medical record!  On August 23, 2018, i started #my100DaysWalking and joined the #GirlTrek #StressProtest!

So you see, the pictures are NOT for bragging but rather my DAILY DECLARATION of who GOD IS IN MY LIFE!  What happens after #my100DaysWalking, well you will just have to follow me to witness the GREATER manifest 365...day by day.  BETTER YET...join the #StressProtest and be a witness to others!

For me, there is NO TURNING BACK! IN JESUS NAME, IT IS SO! AMEN AMEN!!!

Do you want to SPEAK with CONFIDENCE? 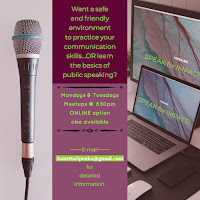